In light of the upcoming elections in Estonia on March 3rd, the controversy surrounding the adoption of the UN Global Compact and EKRE pulling ahead as 3rd strongest political force, the question of the Estonian far-right’s popularity remains somehow unanswered. For more insight, I spoke with Louis Wierenga to address questions surrounding Estonia’s far-right and their increasing connections to militant groups.

This is the first part of a two-part interview with Louis Wierenga, a Junior Research Fellow at the Johan Skytte Institute of Political studies, University of Tartu and a visiting researcher at European University Viadrina and Uppsala University. His research involves the Estonian Conservative People’s Party (EKRE’s) political consolidation process.

Recently, Stefano Braghiroli and Vassilis Petsinis’ article “Estonia’s populist and radical right: how radical are they?” was published addressing how Estonia’s far-right Party EKRE has consolidated itself as the third biggest party and is an increasingly more legitimate political force. What are your thoughts on their most recent activities?

Wierenga: Regarding the OpenDemocracy article, certainly the Estonian Conservative People’s Party (EKRE) has consolidated itself as the third biggest party in Estonia, but they have done so in a relatively short time. They have increased by 4 percent in the polls, while Reform Party (the Estonian liberal party) dropped by 2 percent and the Center Party (the center, socially-liberal populist party) dropped by 2 percent.

After 2015, Estonia has sort of been affected by this as well. Prior to 2015 during the so-called refugee crisis, a lot of people arrived to Europe from Muslim countries in Africa and the Middle East, and the radical right in Central and Eastern Europe was able to jump on this because there was the distinct possibility that migrants might end up in Estonia.

In terms of the most recent activities that have happened in Estonia, a lot of events fall on EKRE’s lap that they can take successful ownership of and use to increase their influence. Rail-Baltica is one of them, the deforestation policies, immigration policies, demographic issues and trying to prevent people from leaving. It is not just any of these issues alone, but of course any of these combined.

There is a demand side in the Estonian electorate for a party to take up an anti-elitarian, opposing stance. That is something that EKRE wants and has, and it has given them further gains in popularity for the 3rd of March elections and the European elections in April which gives them a second shot at expanding their influence.

Their popularity is high enough, so there is not a demand for them to tone down their rhetoric. But it is also a goal of EKRE to remain in the opposition and not the government. I am sure that they would like to have ministries, but they really want to pull all the other parties towards the right. I do not necessarily think that will happen, but it is still their goal.

So far, EKRE has not only been very successful at organizing a grassroot activist base, but also in utilizing their own media outlets. They have a very active social media presence, so in a small country such as Estonia, where there is an absence of the traditional stigma around nationalism and the far-right, their fast growth is not surprising.

Overall, my thoughts on EKRE’s recent activities make sense in terms of how the party is set up. They are trying to appease their support base and they are becoming more nationalistic. After the elections, it might depend on coalitions and what happens with these parties, but overall throughout Europe and even North America we see a really rapidly changing political polarization. What we are seeing all throughout Europe is the center disappearing and the center having to choose if they want to stir more left or more right.

Going back to the article, it addresses how EKRE seems to “tolerate” more militant groups such as the Soldiers of Odin (an anti-immigrant group founded in Finland in October 2015 after the “migrant crisis”). What is your take on this? Are they seeking closer distance with militant groups?

Wierenga: In terms of militant groups, it really depends on the definition of militant. Soldiers of Odin is a grassroot organization that is not directly connected with any political party yet. And I stress the term “yet” as it has happened with other parties and big meta-political groups.

EKRE has not really taken a hard stance against Soldiers of Odin. Plus, in a small country like Estonia, the likelihood of paths crossing between far-right groups and more militant groups like that is really not surprising.

One example of such path-crossing is the “Fatherland Guard” (a Latvian paramilitary organization), which is actually quite old, dating back to the interwar period long before the Soldiers of Odin.  Nowadays, they function in a fairly similar manner. I would say the biggest difference is that the Fatherland Guard participates in more training exercises, and they do have a direct link with the National Alliance (a right-wing populist and national-conservative party in Latvia), even though their methods are not quite the same. 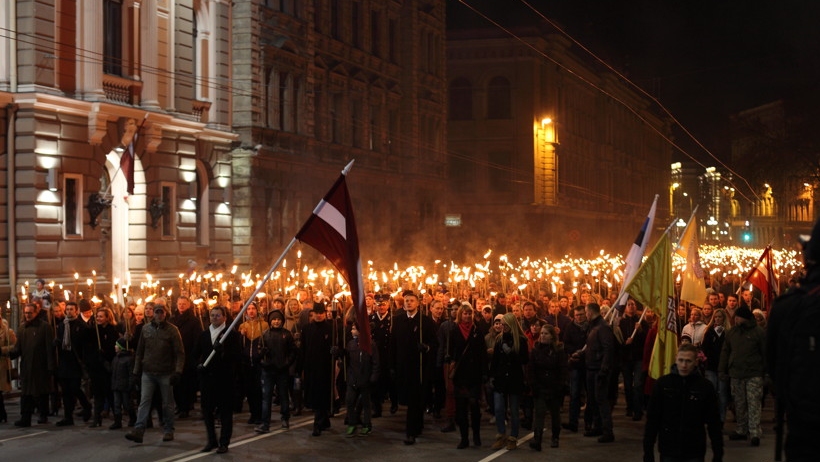 But with groups such as this, and with the political climate in Europe being as it is, it is becoming, in my opinion, increasingly harder to find some type of strict uniformity. With the Soldiers of Odin, they came into being because they were against illegal immigration and since then have established a lot of different connections with extremist groups, especially with the Nordic resistance movement (a Pan-Nordic, neo-Nazi movement and a Swedish political party).

I find with groups like this, you have people who are and people who aren’t, and they are lumped together in a fairly large group. Even though I would not consider Soldiers of Odin large, it is more than just a couple of people, and they have links with “Evening Cross” in Canada, the US and Australia. The other group is the Swedish Nordisk Ungdom. They are a meta political group that did not nominate candidates in the election, but they recently threw their support publicly behind Alternative for Sweden.

In terms of collaboration, EKRE’s youth organization “Blue Awakening” has contacts with some of the most right wing parties and organizations in Europe, including the so-called alt-right in the US and the Identitarian Movement. But I think that the militarization of the far-right is something that is currently happening. It coincides with a shift in what is considered acceptable by right-wing actors solely, things that they will not try to hide, cover up or publicly disengage with.

Of course, on the left and even more in the mainstream, some of the names and linkages that are even subtle and non-official would be condemned, but not so much by the right. We see this in EKRE because they do not have the traditional stigma. It is heading there, but they have already become established beforehand. They were sort of ahead of the game, whereas many other parties in Western Europe were behind it.

With the incorporation of more militant groups, such as Soldiers of Odin, their support for EKRE will likely increase. EKRE has helped them with their public events since 2015. These events are open to anybody, and some have said they functioned as unofficial protest grounds against the UN Compact or in support of various grassroot activities. There is no reason to think this type of cooperation will be less likely in the future.

The only reason this might stop is if EKRE went the path of the Sweden Democrats, for example, which I don’t think that they will. I think the Soldiers of Odin would lose interest if EKRE would try to become more moderate in order to attract more votes. In which case, it is feasible that, if they did tone it down and attempt to mainstream, another more nationalist party might emerge. I don’t foresee this taking place in the near near future, since EKRE has been increasing in the polls and is almost certain to increase in popularity after the next national election.

Alexandra Wishart
Alexandra Wishart is pursuing her Master’s degree in the CEERES program at the University of Glasgow, Scotland. Holding a BA in Cultural Anthropology and Development Studies, she focuses on matters of culture and ethnicity in the post-Soviet space. She feels passionate about political activism, economy and social movements in Eastern Europe and the Baltic States.
Recommended Posts
Latest Posts
Lossi 36

Bringing you news, analysis, and photography from Central and Eastern Europe, Russia, the Caucasus, and Central Asia. Shining a spotlight on the work of students and up-and-coming professionals.

You can find out more about which cookies we are using or switch them off in settings.

This website uses cookies so that we can provide you with the best user experience possible. Cookie information is stored in your browser and performs functions such as recognising you when you return to our website and helping our team to understand which sections of the website you find most interesting and useful.

Strictly Necessary Cookie should be enabled at all times so that we can save your preferences for cookie settings.

If you disable this cookie, we will not be able to save your preferences. This means that every time you visit this website you will need to enable or disable cookies again.